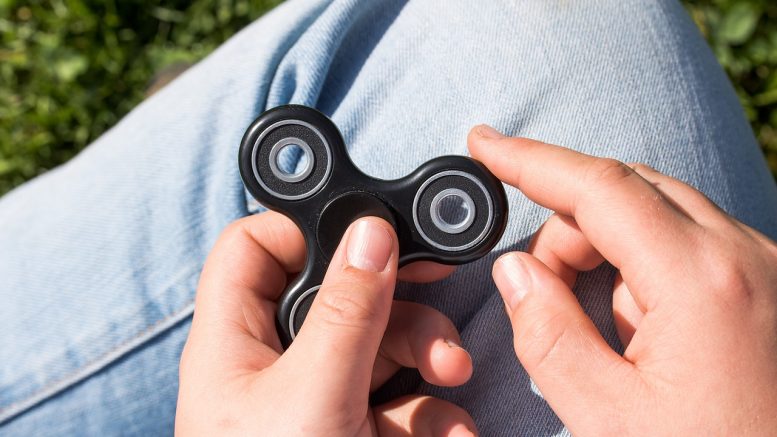 More than 20 years took for Fidget Spinners to become popular. Invented in early 90’s, this toy is now in trend and everybody can buy not only in the nearest toy store but also on gas stations, airports, and train stations.

The most common Fidget Spinner has three blades. There are a lot of other spinners with different amount of blades that can be made from different materials, however, the idea is the same: a bearing in the center circular pad of the spinner allows it to spin, making the shape of the spinner blur. The same effect people can notice if they look at any rotating fan.

Even more popularity spinners got after claims of the manufacturers that their product can be used as a treatment of anxiety or ADHD. There are a lot of rumors that the popular toy can be also used as stress relief and help to focus on everyday life tasks.

The number of children with ADHD is still growing, coming to a real issue during the study. According to CDC, about 6.4 million US children 4-17 years of age (about 11% of all the children) have ever been diagnosed with ADHD as of 2011. As parents of children with ADHD in some cases have to use medications to improve their children study process, they would be happy if Fidget Spinner helped them to stay focused. This makes them an easier target for false advertisement.

Furthermore, some people state that it is scientifically proven that Fidget Spinners have mentioned features. Unfortunately, people’s opinion on the topic is controversy. While some people state that the spinner is really a good choice when you need to focus, other people believe that spinner just adding a distraction factor.

Amy Rich, the third grade teacher at Reed Elementary, said in her interview that she was starting to be over the spinners a little bit. She stated that Fidget Spinner should be the tool to help but it became a distraction at times in classroom as children focus more on the toy than on their work.

Elizabeth Mauhan of Oklahoma City is not a fan of fidget spinners either. Mauhan said that spinners do make a noise, especially when there are about 10 or more children in a classroom where any child with the spinner make everybody turn around and distract.

She added that Fidget Spinner appeared really fast, and now everybody in the class has one. According to Mauhan, children sometimes drop their toys and they clatter and pieces of spinners fall out and children start chasing ball bearing around the room that only adds the chaos.

Fidget Spinner may not work for children as stress-relief and so as a focus helps only because of their low self-discipline. Some people admit it and think that the spinner may be useful with other techniques used in psychology.

Is it scientifically approved?

However, even if Fidget Spinner may be used to help children with ADHD, there is no scientific approval of it.

Dr. Anderson added that there were not psychologically recommended gadgets and some gadgets only fall in line with scientifically-based principles of psychology.

On the top of that, there cannot be any universal recommendations for children with ADHD and treatment goes on a case-by-case basis, so instead of Fidget Spinner people may use different gadgets or other things for stress relief and staying focused.

Be the first to comment on "Are Fidget Spinners a Good Option When It Comes to ADHD Treatment?"