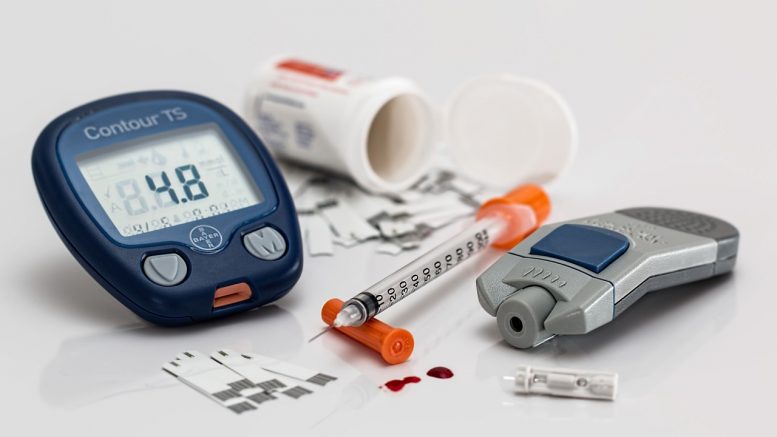 Medical tattoos are in development by Microsoft and the Draper Laboratory. Those tattoos are designed to help patients with diabetes to check their glucose level and allow patients to decrease the number of needles needed to track the level. On the top of that hackers will not be able to hack the pacemakers used for tracking the level of glucose in diabetes patients. However, the tattoos are not limited by only a glucose level and could be used to track a level of any other important molecules in the patient’s body. This approach will let the patients know about the level of a specific substance in their blood and help in taking their medication on time, increasing a medical adherence.

You can also read an article about medical adherence increase methods.

Microsoft is developing medical tattoos, which are not based on nanosensors, but on implanted devices. Also, the tattoo developed by Microsoft will be invisible to human eye and could be detected only with ultraviolet. To avoid any kind of hackers’ attack, the tattoo that is developing by Microsoft will have a “password”. This access key is designed to avoid any access to the device without the permission. In the case of emergency, the tattoo could provide healthcare providers with valuable information if the patient would not be able to tell the password. Otherwise, during a regular doctor visit, the patient could simply tell the password.

The bad news is a visible scar which appears after implanting of the device, however, they will have a positive role as well. In the case of possible emergency, the clothes will be removed and the scar will let health care providers be aware of implemented device. The numerical password will be exposed to ultraviolet light. According to researchers, the password would be chosen by a patient.

An author of a paper, which describes how medical tattoos could stop hackers from changing pacemakers or other devices settings or readings, one of Microsoft researchers, Stuart Schechter, said that their prior work had shown the vulnerability of some of the medical implantable devices to hacker attacks because of the wireless protocols use.

A scientist at the Draper Laboratory, co-author of an article that describes the tattoo, published in the journal Analytical Chemistry, Heather Clark, said that they could follow the same path as the simple finger stick glucometer. Unlike Microsoft, they chose another way the tattoo could be implemented.

Micro balls called nanosensors, which are about 100 nanometers across used in the special link for medical tattoos. With the help of nanosensors, glucose can change the color of pigments: if the glucose level is decreasing, the tattoo color will be darker. Otherwise, the color will be lighter. So with the changes of glucose level in blood, the tattoo will change its color from yellow to orange. However, the difference will not be so easy to notice and human eye will not be able to see it. It will be possible only with the special camera, developed for those purposes.

Unlike a regular tattoo, Clark’s medical one needs only one needle stick to stain only a few layers of skin. This allows the skin to change the color for only one week. Researchers decided to use only a yellow color. Regular tattoo requires multiple needles to penetrate deeply into the skin and stain the skin permanently. In the case of regular tattoos, dark colors are usually used.

During the next year, Clark’s team is going to test specific nanosensors that should measure the exact levels of glucose in the blood because patients with diabetes will be limited by the information only about rise and fall of glucose level in their blood through the tattoo. There is a high chance that the medical tattoo would be available on the U.S. market within several following years.

During the study, Clark and other scientists tracked glucose levels in mice with their special camera. The amount of glucose in the blood was additionally measured to ensure the readings were correct. According to the article, the amount of glucose measured by both methods was the same.

According to Clark, patients will need to purchase a special device, similar to EpiPen, and administer their tattoo only one time per week. It could be possible that patients will be able to read the information not only with a special device but also with their regular cell phone, making a common picture of their medical tattoo.

If Draper Laboratory or Microsoft medical tattoos will be approved for using and clinical use and infrastructure will be developed as well, new ways would be open for patient’s protection and treatment. Unfortunately, this will not be available in the near future.

Rexford Ahima of Univesity of Pennsylvania, diabetes researcher, said the technology was very innovative and promising. He also pointed out the human trials would be necessary before the medical tattoo would be on the market and injected to diabetes patients. He added the technic could be used for other diseases, not only for diabetes. He also said that medical tattoos may encourage diabetics to check glucose levels as frequently as they should and with less pain, especially patients with type 2 diabetics.

Be the first to comment on "Prescription Medical Tattoos?"